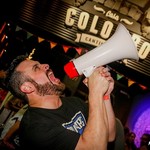 Hi, my name is Axel Magagnini (AKA Madbit) and I am a psychedelic trance producer, DJ and software developer from Buenos Aires, Argentina. I was a founding member of Mindprobe -Argentina's first psychedelic trance live act- from 1997 until I left the band in 2003. I have also played in various local nightclubs and parties as a DJ until 2006, and was an active member of the tracker music community from 1990 to 1997. I briefly came back under the nickname "Salamander" on 2012, but I went back to my origins and decided to keep my original nickname from 2020 and onwards.